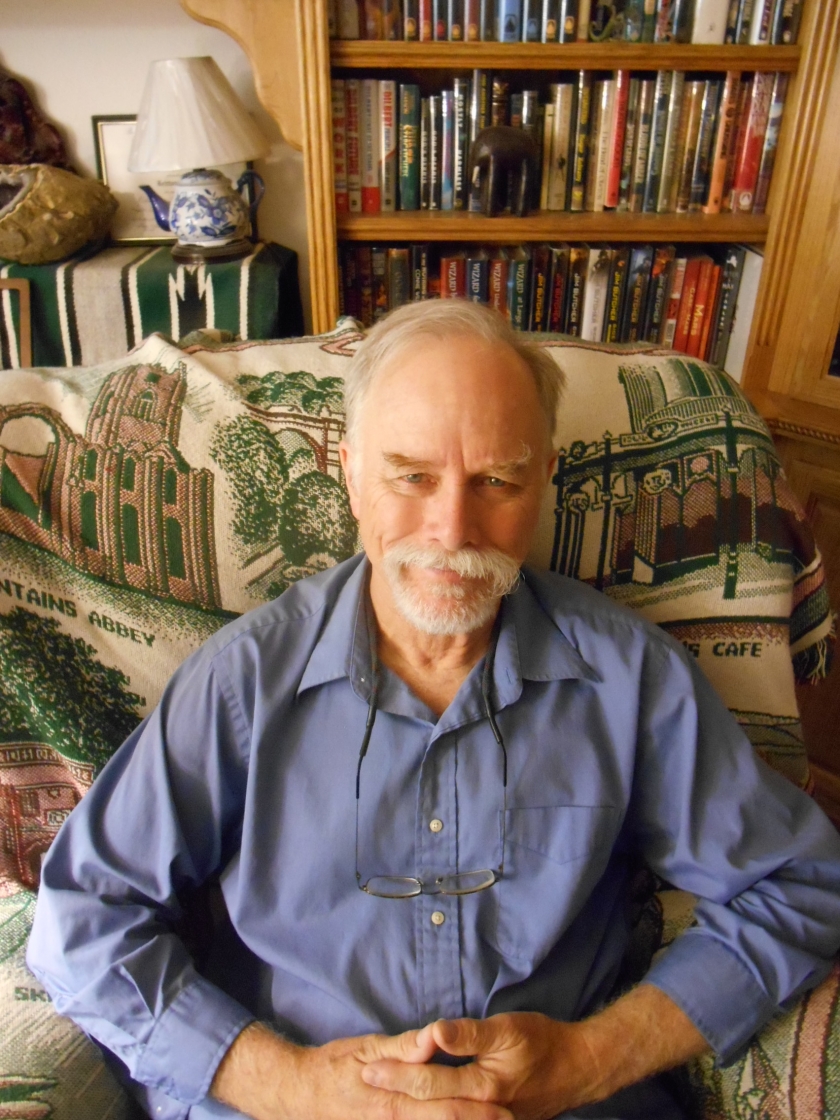 Tom Jolly’s fourth story with Analog (all run since 2017), “The Camel’s Tail,” appears in our current issue on sale now. Below he discusses the role science plays in his writing, the spark for his current short story, and what books reside on his figurative bedside table. Watch out for spoilers below!

Analog Editors: How did this story germinate? Was there a spark of inspiration, or did it come to you slowly? [POTENTIAL SPOILER BELOW]

Tom Jolly: The seed for “The Camel’s Tail” was the idea that you could do an orbital momentum transfer in the manner that the alien ship does it in the story; splits itself in two, meets on the backside of the planet or star with a pair of tethers, and transfers part of the angular momentum to create a stable orbit, and leave the other half to do any number of things, in this case, a hyperbolic orbit to the next star along the exploratory path. The other science details, like the matter/antimatter lattice, the gamma-ray particle pair production, and the idea about super-atoms, were all things I’d read about that got attached to the story as it unfolded. The conflict for the story was self-generating. Once you have an alien spacecraft cruising through human space, people are going to fight for it with whatever resources they have.

AE: How did the title for this piece come to you? [POTENTIAL SPOILER BELOW]

TJ: I’d started with Somali characters, because I knew that the story would end with them talking about building a space elevator because of the bit of cord they’d managed to salvage, and their home happens to be right on the equator. Then, while researching Somali culture, stories, and poetry, I stumbled across the folk story of The Camel’s Tail, and realized what a perfect analogy it was for what the characters had achieved.

. . . my stories are usually spawned from some weird science idea. In at least two of my stories for Analog, I spent quite a bit of time calculating orbits required for the story setup; it’s really helpful to be able to do that.

TJ: This will be my fourth story in Analog, with number five in the queue. My first story with Analog was in the Jan/Feb 2017 issue—“Catching Zeus,” followed by “The Mathematician” and “Fermi’s Slime.” I’m sure I’ve received a few rejections from Analog over the last forty years from previous editors but frankly don’t remember. I used to collect pulps when I was a kid, too, with a nearly complete set of Astounding Stories/Analog going back into the early ’30s, those gorgeous giant-sized magazines with the eye-catching artwork. I loved those things. It was great to discover that some of the classics of SF were originally serialized in the pulps. I ended up selling the entire lot to buy some property, which I regretted, but over the years I moved fifteen times, and I would have hated them by then; 1,600 large magazines weigh a lot.

TJ: I seem to have generated a half dozen stories about people flying, along with a book (as yet unpublished). Each “flying scenario” has its own strange source and limitations, but I think I’m obsessed with the imagined freedom associated with flight. Even in dreams. I don’t think any of these stories would be publishable by Analog; they all fall squarely into the realm of science-fantasy.

TJ: I’ve been trying to sell SF stories since I was about sixteen. They were really terrible. Back then, everything was written on a typewriter, and the latest innovation was a correction tape built into my Selectric that replaced the use of my little bottle of Whiteout. So, that was 1970-ish. There was no email, so every time you sent in a story, it was a buck or two in postage and freshly typed pages. I spent a decent amount on postage, with no sales, but I built up a nice collection of rejection slips from F&SF, Galaxy, Omni, and others over the years. By 2011, apparently I figured out how to write acceptably, or I at least stopped using the really bad SF clichés, and made a sale to Daily Science Fiction. Sales have accelerated since then, with ten short stories placed in 2017 alone. The education I acquired while working in the space industry has helped a lot, too.

TJ: Besides a pile of unfinished short stories, I’ve been trying to find a home for two finished books, and cleaning up a third. The first is about a kid whose gravity turns sideways. Pure science-fantasy. The east wall of his house is his new floor. Naturally, he ends up falling (or flying) across a decent portion of the U.S., with “bad guys” pursuing him most of the way. He learns to alter other matter, and things get interesting. I named this “Sideways” about a month before the wine movie was released. Grrr! Now it’s called “The Infinite Cliff.”

The second project (fantasy), “An Unusual Practice,” involves a doctor working in a clinic in California who unexpectedly starts getting supernatural patients with their unusual issues. They kind of adopt him as their go-to guy, which brings him face-to-face with those that don’t care for the health of the supernatural community, and worse. This was fun to write, and I’m working on a sequel or two. I recently placed a short story based in the same universe.

The third book is a tense series of arguments about the various conflicts between religion and secularism, coauthored with my brother Steven, who represented the opposing view. It’s taken over eight years to write, which unfortunately means that a good fraction of URL references evaporated by the time we finished the last chapter. This was a really difficult (and stressful) book to write.

TJ: The prediction that somehow we’ll be able to go to other stars and settle distant planets. We don’t really have a propulsion system that will let us do that yet. There are lots of ideas, of course, and maybe some science fiction author will offer up some idea that will click for some rocket designer some day, and we’ll have the stars. “The Starflight Handbook,” by Eugene Malloff and “Future Magic,” by Robert Forward, had some really interesting ideas for arcane propulsion systems, and both books were inspirational to me (though neither was exactly science fiction; more like science prediction). These both were written well before the Alcubierre warp drive was proposed, which physicists are still arguing about.

TJ: I recently finished Steven Brust’s Vallista and Marie Phillips’s The Table of Less Valued Knights, and I’m still working on Cixin Liu’s Death’s End. I’m looking forward to Andy Weir’s Artemis (The Martian was so good!) and John Scalzi’s new book, Head On. I also regularly read an amusing web serial called The Wandering Inn, a surprisingly addictive fantasy series by “pirateaba.” For my nonfiction reading pleasure, I’m crawling through Black Holes and Time Warps by Kip Thorne, having just finished his book, The Science of Interstellar, a month ago.

TJ: I also design board games (since 1985) and difficult 3D puzzles. The published designs are listed on the website at the end of this Q&A. It’s a busy retirement. I enjoy going to game conventions and SF cons when they’re nearby, and look forward to the WorldCon in 2018.

I was an active LASFS (Los Angeles Science Fantasy Society) member for quite a few years and got to meet Niven, Pournelle, and Gerrold, among others. I worked a table for David Gerrold at a Star Trek con one year selling tribbles, a long time ago. When I moved out the area, I lost touch with everyone, but being able to hobnob with well-known writers back then certainly had some influence on my desire to write.

My wife, Penny, and I live in the middle of an oak forest near Santa Maria, California, where we sweat about the possibility of fire every year. This year has been worse than most, with the Thomas fire on its way to being the largest in California ever, about fifty miles south of us.

TJ: I have degrees in astronautical engineering and electrical engineering, and spent most of my career working on Titans and satellites. And I read a lot of popular physics. Yes, this strongly influences my writing since my stories are usually spawned from some weird science idea. In at least two of my stories for Analog, I spent quite a bit of time calculating orbits required for the story setup; it’s really helpful to be able to do that.