My story, “Shooting Grouse,” [on sale now in the May/June issue] is about the British sport of the title. The grouse is a bird that’s prized because its fast flight makes it particularly difficult to shoot. The sport goes back centuries to the pre-Victorian era. Grouse are reared on large estates specifically managed for them: they eat heather, and so the estates comprise vast tracts of heather. Other wildlife on these estates is strictly controlled by trapping and poisoning, in order to reduce competition for the grouse.

it suddenly came home to me that the entire heather moorland existed solely for the purpose of allowing people to shoot birds. Very little of England’s landscape is “natural.” I was walking through a vast shooting gallery.

The need for large estates, and expensive shotguns, meant that shooting was historically a sport of the upper classes. The record for bagging grouse belongs to Lord Walsingham, who one day in August 1888 personally shot more than a thousand birds. That was on Blubberhouses Moor, Yorkshire, which is less than twenty miles from my house.

Grouse shooting continues as a sport to this day. It’s still an upper-class hobby, but it’s now more accessible to a wider range of people. As an ancient sport with aristocratic associations, it’s popular with the kind of people who like the idea of participating in the traditional sport of the gentry. (And, of course, it’s popular with people who like guns, but in Britain there is much less of a gun culture than there is in America.)

There are two main ways that grouse can be shot. In “driven” grouse shooting, the shooters (known as “Guns”) stand and wait behind hides (known as “grouse butts;” often a set of small stone walls covered in turf) while the estate workers drive the birds toward the Guns. In “walk up” shooting, the Guns walk across the moor and use dogs to flush out the birds.

Although the main point of grouse shooting is the skill and the challenge of it, the birds don’t go to waste. The grouse are eaten. Because they live their entire lives in the open countryside, they can be considered the ultimate free-range food.

The idea for my story came to me one day while I was out hiking. I passed some grouse butts in the uplands, and I experienced a moment of realization. I’d vaguely known this before, but it suddenly came home to me that the entire heather moorland existed solely for the purpose of allowing people to shoot birds. Very little of England’s landscape is “natural.” I was walking through a vast shooting gallery.

Like many ancient traditions that once went unquestioned, grouse shooting is now rather controversial. And controversy—conflict—always has the potential to make a story. So I wrote one! The story’s title has a double meaning, because “grouse” also means a complaint, so “Shooting Grouse” refers both to the sport itself, and to opponents’ complaints about shooting.

I won’t go into all the arguments here. Many of them are addressed in the story itself. However, I will explain a couple of issues because this blog post—unlike the story—gives me the opportunity to include pictures.

I mentioned that the shooting estates consist of heather moorland because the grouse eat heather. Specifically, the grouse prefer to eat young, growing heather. Consequently the estate managers regularly burn off older heather, to make way for young heather to grow. This means that when you’re out hiking, you frequently see large areas of landscape looking like this:

Aside from the sheer ugliness of it, the practice of burning heather has other drawbacks: it increases flood risk, and it can burn the underlying peat, which contributes to global warming.

I also mentioned that other wildlife is strictly controlled, in order to maximize the grouse population. This means that the moors are full of traps like this:

I do, of course, have my own opinions about the merits of grouse shooting. However, when writing the story I was careful to present each side’s case as well as I could, within the limits of fiction—after all, it’s a story rather than an op-ed. I’ve given you the background here; the story gives you the action. 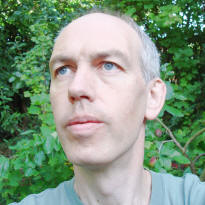 Ian Creasey lives in Yorkshire, England. He began writing when rock & roll stardom failed to return his calls. So far he has sold seventy-odd short stories to various magazines and anthologies. For more information, visit his website at iancreasey.com.