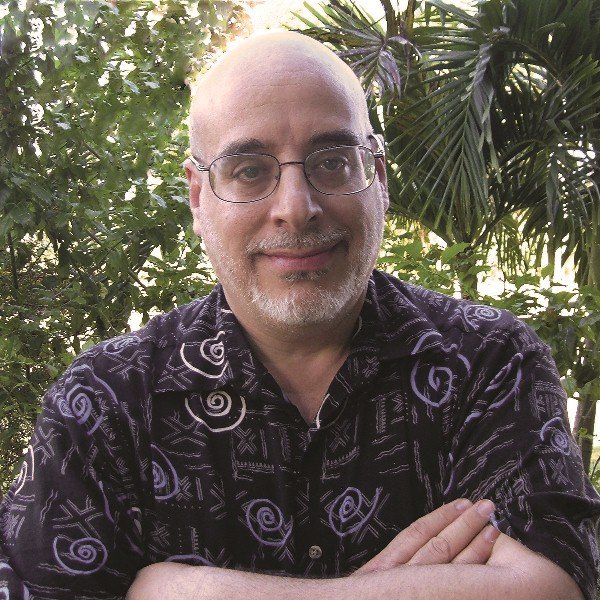 Regular contributor Adam-Troy Castro gifted us editors and readers alike with an Andrea Cort/Draiken crossover in our current issue [on sale now]. Here, he touches on his history with Analog, his plans for some of his favorite characters, writing advice, and much more.

Analog Editor: Adam-Troy, our readers are of course familiar with your work, and are in for a treat with “A Stab of the Knife” when they see two series regulars meeting face-to-face. What was it like writing an Andrea Cort/Draiken crossover? Personally, my own feelings at the prospect of this event can only be described as glee.

AC: I found most interesting the prospect of writing an Andrea story that was not from her point of view (either in first or third person) that presented her as an enigma in the viewpoint of another. I never doubted which of the two would end up on top, where their interests conflicted. What was difficult was placing the story as late in Andrea’s timeline as I did (to wit, after the second novel, The Third Claw of God); I did that largely because I missed the hell out of the Porrinyards and wanted to put them in the position of, ah, Bond Girl.

AE: Now, I know that a parent loves all of their children equally, but do you have any favorite characters of your creations?

AC: Andrea and Draiken are way up there, but I possess a divine love for my middle-grade character Gustav Gloom, who I swear up and down and sideways will return, in some form someday (perhaps as an adult).

AE: I know you can’t tell us what’s in store for either Draiken or Andrea (and we wouldn’t want spoilers anyway!), but do you have any teasers for our readers?

AC: Stories about both characters are in the works, if not yet in the pipeline. It is, for various reasons, unlikely that they will meet again. I can say of Andrea that if I do ever again get to handle her at novel length, the chronologically latest stories of her now well-documented life (the novel War of the Marionettes, the Analog novella “Hiding Place”) place her in a position where she must either change forever, becoming someone else entirely, or retrench. Stories will continue to focus on “Early Andrea.” I will say of Draiken that the story now passing 20K was designed as a roller-coaster ride, more action than anything else. More, you’ll see when it comes.

AC: It seems almost generic, does it not? But it refers to something very specific that happens. Andrea’s the one wielding the metaphorical blade. I have found that with these stories, in particular, the best thing to do is just write the piece and wait for a phrase to come up, in the course of the plot.

AE: What made you think of Analog for this story?

AC: Not a stretch! Analog is Draiken’s home, as it is for Andrea at shorter lengths. She was introduced in the magazine, before going on to inaugurate my career as writer of non-media novels. When I write stories about either of these luminaries, they go straight to Analog.

AC: Aside from already owning a full bookshelf of the magazine in my teens—I remember getting the issues with the Windhaven novella by Lisa Tuttle and George R.R. Martin, “The Screwfly Solution” by Raccoona Sheldon, and I believe but cannot swear, a little thing called “Ender’s Game”—I have been publishing in Analog since my collaboration with Jerry Oltion, “The Astronaut from Wyoming.”

AC: Not so much when I’m writing far-future science fiction. I have completed a mainstream suspense novel (as yet unsold), where one of the subsidiary figures is very easy to take as a parody of a currently ascendant political force.

AC: The Andrea Cort/Draiken universe (part of a future history I call “The AIsource Infection”) has seen several manifestations of mind control technologies. This is built into the overall picture but has shown up in a number of unrelated stories as well. I seem to have an affinity for Brother/Sister stories as well, and have an unexplained tropism to the character name “Ethan.”

AC: Between books, as I just finished one this morning. My very next is The Outsider by Stephen King. (I wish I could have named something more out-of-the-way and recommendy, but such is timing.)

AC: Write everything. If there’s a story type you don’t think you can pull off (western, police procedural, love story, violent horror, whatever) or a kind of character you’ve never attempted (an unfamiliar background, another gender), a tone you’ve never struck (elegiac, let’s say, when everything you’ve ever written is gosh-wow; silly, when everything you’ve ever written is dead serious), make it your next project. I’m telling you, this is the way to grow. In the early days of my career, I always carefully explained that I was just a horror writer, and that I had never written science fiction. Then I did. Your unfamiliar areas are where the art comes from.

AC: I give regular updates on my Facebook page and have a regularly updated bibliography with clickable links on my website wwww.adamtroycastro.com.

Adam-Troy Castro made his first nonfiction sale to SPY magazine in 1987. His 26 books to date include four Spider-Man novels, three novels about his profoundly damaged far-future murder investigator Andrea Cort, and six middle-grade novels about the dimension-spanning adventures of young Gustav Gloom. He has just completed a mainstream thriller, currently making the rounds. Adam’s darker short fiction for grownups is highlighted by his collection, Her Husband’s Hands And Other Stories (Prime Books). Adam’s works have won the Philip K. Dick Award and the Seiun (Japan), and have been nominated for eight Nebulas, three Stokers, two Hugos, and, internationally, the Ignotus (Spain), the Grand Prix de l’Imaginaire (France), and the Kurd-Laßwitz Preis (Germany). He lives in Florida with his wife Judi and either three or four cats, depending on what day you’re counting and whether Gilbert’s escaped this week.