Sean McMullen’s newest tale—”The Pendant Lens” [on sale in the current issue now] visits history with a science fictional twist. In the following Q&A, he takes us along the thought-process that brought this clever story to our pages.

Analog Editors: Can we start with a few words on your background?

SM: I am a science fiction author living in Melbourne, Australia, with my girlfriend and our two cats Loki and Freya. I worked in scientific computing and wrote science fiction part time until my boss pointed out that I was paying the tax man to come to work. I resigned, and now write full time. I have had eleven stories published in Analog, with two winning the readers’ award and another getting a Hugo nomination. The Pendant Lens is number twelve. I teach karate at Melbourne University for a break from typing.

AE: What is the story behind this piece?

SM: During the 1790s, during the Terror in the French Revolution, the ruthless and charismatic leader Robespierre suddenly lost his nerve for no apparent reason. He had plenty of enemies by then, so he was arrested and guillotined pretty promptly. Anything dramatic and unexplained is always good material for a science fiction story, so I decided that Robespierre had a machine that gave him an advantage. Take away that machine, and he would be up to his earlobes in trouble.

AE: How did this story germinate?

SM: I had seen a very dramatic engraving of the St Petersberg researcher Professor Richmann being killed by an electrical discharge in 1783. Later I learned that the earliest form of electrical lighting was a fluorescent device developed by the English inventor Hauksbee in 1705. I developed the idea of an alien artifact that runs on high voltage electricity and needs fluorescent lighting, and back in the 1790s this would have been a difficult and dangerous technology to use. 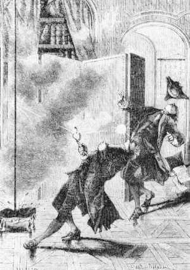 The key component is a mysterious lens. One can use lenses to examine the very small or the very distant, so I decided that a lens might also be used to look into the future. Knowing what is about to happen would have been a very useful survival aid in Revolutionary France in the 1790s. By now I had the setting, science, idea, and characters, so I got on with the story.

SM: The surviving component of the alien device is a lens on a chain, which just looks like a magnifier for a shortsighted person under normal lighting. Several Father’s days ago my daughter gave me a Nineteenth Century optometrist’s diagnostic lens on a brass chain, so this medical device became The Pendant Lens. 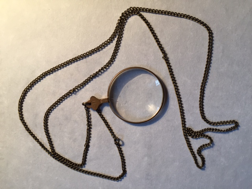 AE: What made you think of Analog for this story?

SM: Analog’s readers, mainly. The Pendant Lens is pretty accessible for any reader, but to fully appreciate it you require at least a basic grasp of science and technology. Analog readers are pretty savvy when it comes to science, and some even check on the historical science, machines, companies, and references in my stories. This keeps me pretty honest with details. Two of my Analog stories have been given the annual readers’ award, and another was shortlisted, so I seem to be getting something right.

SM: This admission may make me a few enemies, but I’ve never had it. I always have too many ideas, characters and settings, and when I am developing a story this can be quite a problem. I will often rewrite a piece completely when I think of a better way to tell the story, which soaks up a lot of writing time. I also have to go through newly stories and toss out a lot of very cool sub-plots and ideas because they make the work way too complex, and that really hurts sometimes. Mostly. Okay, okay, it always hurts.

SM: Over a very long period. Like Terry Pratchett I started writing science fiction stories while at high school; but unlike Terry I lived in Australia, a country with no science fiction magazines at that time. I got diverted into music, where I spent fifteen years as a folk and rock singer. Terry once told me that he also did a bit of folk singing, but he was wise enough to stick with writing. I actually earned my first money from science fiction in a science fiction opera, when I landed a part operating a giant baby making machine and singing a few solo lines.

When I did return to writing I spent six years in the amateur wilderness before winning the writing competition at Australia’s second Worldcon, and that was my big break. I now had “competition winner” and “world” on my CV, and editors seemed to give my manuscripts higher priority when they saw that. My first professional story came equal top in the readers’ poll for best-ever story in Omega magazine, my first overseas sale (to Fantasy and Science Fiction) reached the Nebulas Preliminary Ballot, and in 1992 An Empty Wheelhouse became my first sale to Analog. By now I was being introduced to people like Neil Gaiman, George R.R. Martin, Terry Pratchett, Sprague de Camp, and Tanith Lee as a fellow author, and this was way more cool than singing about convicts and bushrangers in a folk-rock band.

I keep returning to short fiction because it gives me a chance to use ideas that do not readily fit into longer works, or to test their popularity for future novels.

SM: I have always liked telling stories, and I also had a weakness for doing my own science when I was growing up. I nearly set my parents’ house on fire when my primitive radio telescope shorted out, and some of my experiments with model rockets had the neighbors pretty worried, especially when they exploded. My first traffic accident happened when one of my rocket powered model cars became airborne and hit a neighbor’s car. I never owned up to that one.

Everyone was very relieved when I started writing stories about science instead of building my own hardware, and I was given a lot of encouragement. I won a couple of school prizes for science fiction short stories, but as I mentioned before, there were no professional magazines in Australia at that time, so writing seemed like a lost cause. Then I was given a guitar for my birthday and I discovered that musicians meet lots of girls.

AE: What other projects are you currently working one?

SM: A couple of books, several scripts and a dozen or so stories. I have a fourth Greatwinter novel doing the rounds with publishers, a steampunk novel just finished, and a climate change novel nearing completion. I keep returning to short fiction because it gives me a chance to use ideas that do not readily fit into longer works, or to test their popularity for future novels.

SM: My talented daughter, who is following in my footsteps. After a childhood of being exposed to science fiction books, shows and conventions, Catherine has now become a writer as well. She started writing stories and meeting other authors from when she was tiny (she was two years old when she met George R.R. Martin for the first time, and Neil Gaiman once called her the oldest nine year old in the world). She sold her first story at the age of ten – Teddy Cat, to Interzone. After publishing a few short stories in Nightmare and Aurealis, she moved in a slightly different direction, and decided she wanted to be a screenwriter. After slogging it out as an assistant and working on sets, she won the Sir Peter Ustinov Award from the International Emmys, and the Australian Writers’ Guild John Hinde Award for science fiction, which I accepted on her behalf (she was working in LA). I couldn’t be prouder.

AE: Many of our Analog readers are interested in science. Do you have any scientific background, and does it impact your fiction?

SM: I worked as a laboratory assistant in a cancer research institute while at university, and I studied physics, maths, chemistry, computing and history for my first degree. I gave up study after getting my doctorate, and spent the majority of my working life in Australia’s Bureau of Meteorology, mostly in computer support, systems design and management. This involved writing data correction algorithms, weather satellite tracking, installing machines around the country, supercomputer support, and five years as project coordinator to get the Bureau’s six thousand monitoring and research computers compliant for the Year 2000.

All of that means I have observed scientists in their natural habitat for a very long time, which is quite a good grounding for a science fiction author. Terry Pratchett spent some years as a journalist in Britain’s nuclear industry, and I remember us agreeing that working with scientists rather than actually being one was the best training regime for an author.

Sean McMullen lives in Melbourne and worked for three decades in scientific computing while running a parallel career as a science fiction author. He has had 120 books and stories published and has won over a dozen awards, as well as having Hugo and BSFA award nominations. A collection of his recent stories, Dreams of the Technarion, was published by Reanimus Press in November 2017. His daughter is the award winning SF and horror screenwriter, Catherine S. McMullen. Online, Sean is at http://www.seanmcmullen.net.au.