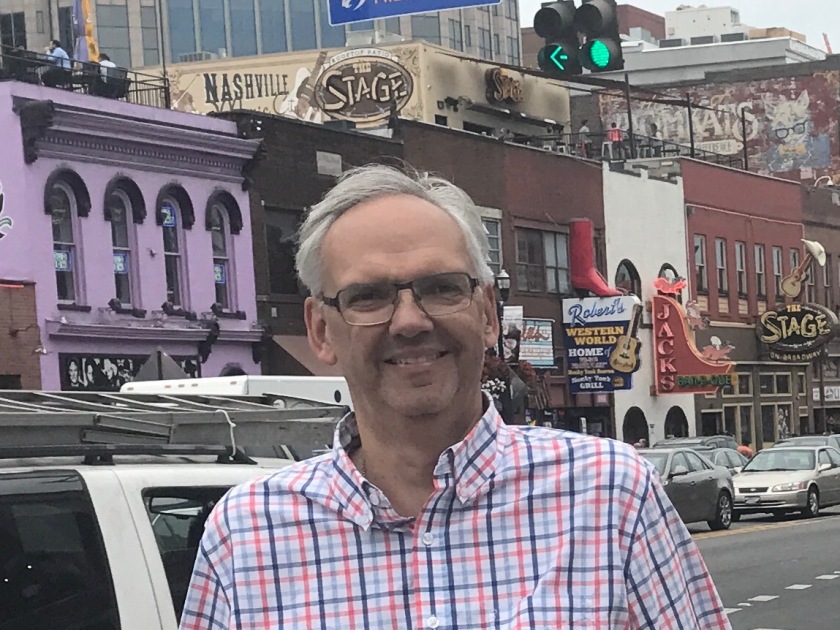 This issue’s cove story—“Go Random, My Love”—is the start of a new adventure from Bill Johnson, and readers will not be disappointed! Read on for some background on this universe and hints at what might be happening behind the scenes….

BJ: It started at an assisted living center where I visited my father-in-law.

A man stepped out of one of the rooms. He was older and nicely dressed, coat and tie, freshly shaved. He gestured to one of the attendants.

“Ma’am, can you tell me when they’re going to bring breakfast? My wife is hungry.”

The attendant looked at him with a long-suffering, tolerant expression.

“You just go back inside and sit down, Mr. Cummings. You got your breakfast an hour ago.”

“Did I get eggs? I always like the eggs.”

“Yes, you got eggs,” she said soothingly. She held him by the arm and guided him back inside, eased him into a chair in front of a TV set, settled him into place. She changed the channel to a baseball replay station. He tensed, then relaxed.

She stepped outside, saw me in the corridor.

“She died last year,” she explained, matter of factly. She glanced back at him. “Poor thing. Wasn’t anybody at the funeral except for a couple of us from here. Everybody else was long dead and gone.”

Which got me thinking.

Medical research fascinates people but when you talk about the ultimate goal of that research, it makes people uneasy.

“So, when all of the current diseases are cured or treatable, what happens next?”

“Well, for example, after you cure Alzheimer’s and Lewy’s and general dementia, what do those people work on next? There must be other diseases and conditions after that. Isn’t the general purpose of medical research to keep on curing whatever is after that, to keep on extending life? So what is the ultimate goal? Immortality?”

At this point, I typically get a nervous laugh from people. The idea of immortality gradually sneaking up on them, one treatment at a time, one disease at a time, is something everyone can understand but, generally, it makes people uncomfortable. It’s one of those I can actually see this happening but I don’t really want to think about it because people will think I’m silly questions.

So I decided to think about it and follow it through, logically. This story is the result.

BJ: It is. In the future I imagine, immortality happens gradually, with a lot of casualties along the way. Only a few people alive now make it to the end. And they’re in pretty bad shape. When they are finally put back together, they find the world they’ve woken up in is not really what they—or anyone—expected. There is a qualitative difference between these Grandparents (Aljidat) and the Parents and the Children. Their dreams, worries, concerns are all different—but just as important—from the others.

“In the future I imagine, immortality happens gradually, with a lot of casualties along the way. Only a few people alive now make it to the end. And they’re in pretty bad shape. When they are finally put back together, they find the world they’ve woken up in is not really what they—or anyone—expected.”

“You can’t do just one thing” means that every decision, every choice, has obvious effects and sometimes not-so-obvious effects. People make casual decisions every day, and larger decisions on a regular basis. The results are what makes life interesting and worth living and writing about. Sometimes they’re expected:

“Well, (tearing up lottery ticket) I’ll try in a few weeks when the jackpot builds up again.”

“Holy crap! (reads numbers again, checks against screen, repeats) What do I do now?”

As for “It’s not that simple, but you’ve got to make it simple,” that’s just a part of life. We all have to make complicated decisions and then live with the results: “Do we want a kid?”, “What if we moved out of the city?”, “Should I take the new job?”

In science fiction, the settings are typically different than everyday life, but these two themes still hold true. I like to explore them and see the results. To me that’s interesting.

I do a lot of research for my stories. Much of it tends to be physics. I use this to set up situations, to explore new places and problems. And the concept I continue to run into in physics and astronomy is infinity.

Let’s take gravity as an example.

We can measure gravity. One G (Earth gravity), for example, is about 9.8 meters per second per second. When we double the mass, it goes to 16.6. Keep doubling it enough, and we can measure exactly how much gravity it takes to make that gravity so strong it bends light back in on itself and we form a black hole.

So what is the gravity inside a black hole?

We don’t know. It goes infinite. The mass keeps collapsing in on itself, making the gravity stronger and stronger, more and more powerful. And, here, the math goes silent. Our nice measurable gravity has turned into an infinite force.

So what is it like inside a black hole? We can’t be sure. Its center is an infinitely strong point of gravity.

Or maybe we can describe what it’s like inside a black hole . . .

A black hole can be defined as area of space where light is trapped. You can’t see out of a black hole, only inside it.

Our visible Universe is about 44 billion light years of space and stars and dust that we can see. We can’t see beyond it. Technically, we’re trapped inside a black hole. Does space extend for an infinite distance beyond our visible Universe or does it just end? Did the inflatons that created our Universe create just us and then vanish, or did they continue beyond our sight to create an infinity of . . . what?

BJ: I like Jodi Taylor’s universe. Time travel is a fun concept (though when you think about it, any time machine would also need some big warp engines to catch up with Earth because it would have moved), and I like her characters. She does a good job of her history, also.

“Some people call me the space cowboy, yeah

Some call me the gangster of love

’Cause I’m a picker, I’m a grinner

I play my music in the sun”

I’ve had a lot of different jobs and—surprisingly—the education to go along with them, from a bachelor’s and a master’s to a black belt in Six Sigma. I have done a lot of corporate work, a lot of freelance work and a lot of start-ups.

Mainly they affect my writing because I’ve had to learn to be very disciplined. If you have a number of things you’re trying to do at the same time, you have to pay absolute attention to them. For example, my writing time is very scheduled and I follow through with that schedule. It’s the only way to accomplish things.

Bill Johnson was born in South Dakota, then moved into civilization. He met Joe and Gay Haldeman in the Midwest and learned to write, then went to Clarion with Gregory Frost and got the arrogance about what a great writer he was beaten out of him by people like Chip Delaney, Roger Zelazny, Gene Wolfe, Kate Wilhelm, and Damon Knight. Nothing like twenty-five people in a circle ripping your beloved story to pieces to chip away at your pride! Bill is married to a wonderful person who has two separate Bachelor’s degrees, one in Business and one in Nursing. “Hybrid” got its start after Bill got back one of those genetic tests. It turned out he has a lot of Neanderthal in him. Interesting. So he started reading up on Neanderthal, which led to all our other relatives (Denisovan, Red Deer Cave, the unknown one in Africa) and to Homo Sapiens. Most research seems to show all our relatives and ourselves had a really bad time about 50,000 years ago BCE. Everyone had declining populations and were dying out. Suddenly, alone of all the sapiens, we started to socialize together in larger numbers. We started to move out of being ambush hunters (like Neanderthal and probably the others) and turned more into cursorial hunters (we went out after the prey). We started to use atlatls and bows, distance weapons, so we didn’t have to get in close to our prey and risk getting crushed by them. And, at the same time, dog bones start showing up at our burial sites. The theory is simple: humans and dogs co-evolved. We helped each other to survive. And it’s very curious that about the time dogs and humans started living and working together, the size of human bands and tribes began to grow dramatically. It was a lot to put into a story, but Bill thought that Martin and Artie might be able to pull it off.