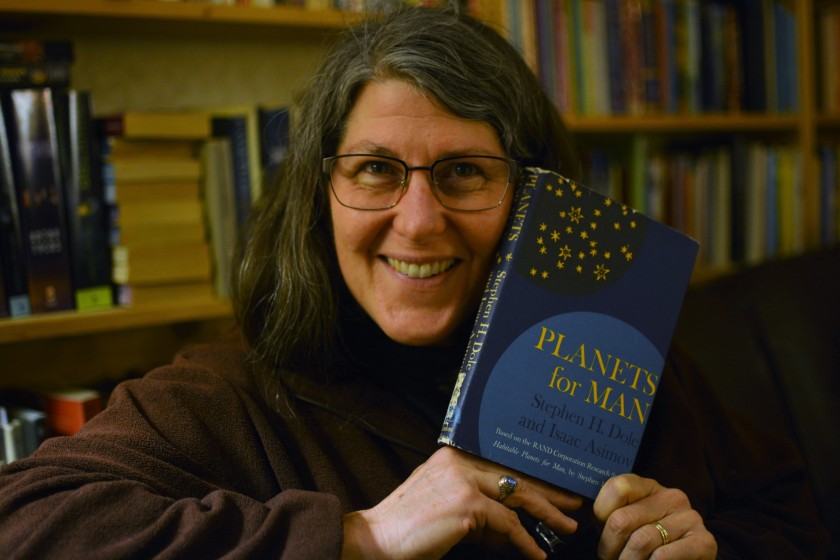 Analog newcomer Susan Pieters discusses her story “The View from Proxima Centauri” and the struggle of staying ahead of scientific discoveries when writing the tale in our newest Q&A.

What would you say “The View from Proxima Centauri” [on sale now in our Jan/Feb issue] is about?

This story is about blind spots. No, wait, it’s about optimism. Actually, it’s about being a nice Canadian, sooo polite. Also, it’s a critique of the space program, and I’m surprised Analog agreed to print it. Seriously. Read it at your own risk.

How did the title for this piece come to you?

Some of the inspiration came from Planets for Man, by Stephen H. Dole and Isaac Asimov. Published in 1964, it’s amazing how much still-reliable information is compiled in so short a space. Although they deem Proxima Centauri (or “Alpha Centauri C” in their diction) as too small a sun to be able to possess a habitable planet, the tone of the book is full of surety that space travel into other solar systems will be achieved. Such confidence! Such optimism! Such hubris! Well, I don’t mind saying that the view of Cassiopeia from Proxima Centauri is the first diagram of the book, and one of the final images of my story.

What worried you when you wrote this?

One of the dangers of the topic was that articles were constantly being published with new insights for Proxima Centauri. I collected articles from the Economist and the New York Times, afraid that some of my playful theories would be contradicted before I was able to print the story. So far, there’s enough unknowns about the system that my story “could” possibly happen.

How do you deal with writers’ block?

I’m not sure how to deal with writers’ block, but I do know one thing: It never rears its ugly fangs when I have a deadline, or when I truly believe someone on the other end is going to enjoy reading my story. The distant cheers of future readers scare away all sorts of dementors; it’s nearly as effective as chocolate.

How did you break into writing?

The hard way. I helped found a magazine and became an editor in order to learn the craft better and to get my own stories out there. I certainly upped my game, but I also spent a lot of unpaid hours working on other people’s stuff. The process changed me. I recommend volunteering at a small press (or any press) for those wanting to improve their writing and appreciate what a helluva lot of work goes into traditional publishing.

Many of our Analog authors are interested in science. Do you have any scientific background, and does it impact your fiction?

My stepfather taught marine biology at the local university, and when I was a freshman, he enticed me to take a biology course designed for science majors, not unprepared humanities students like myself. When I got an A in zoology and a B in Intro to Shakespeare, he lobbied heavily for me to enter the sciences and give up my English degree. “Why do you want to study English?” he asked. “People just make up stuff about what a poem means. You can say anything, it doesn’t matter. It has no real answers.”

I’ve often thought just the opposite. Scientists make up theories about what facts mean, but it has no real answers. It’s literature that tackles the really tough questions, like why. Or why not.

So, to answer this question, despite my lack of formal training, I still find the science to be the easy part, and the story editing takes the most time. I decorate my stories with science, but my heart is as a writer of literature.

Susan Pieters writes under the rainy skies of Vancouver BC, which really mess with her view of the stars. She has an MA in English and is a founding editor at Pulp Literature magazine, based in Canada. “The View from Proxima Centauri” marks her debut in Analog.