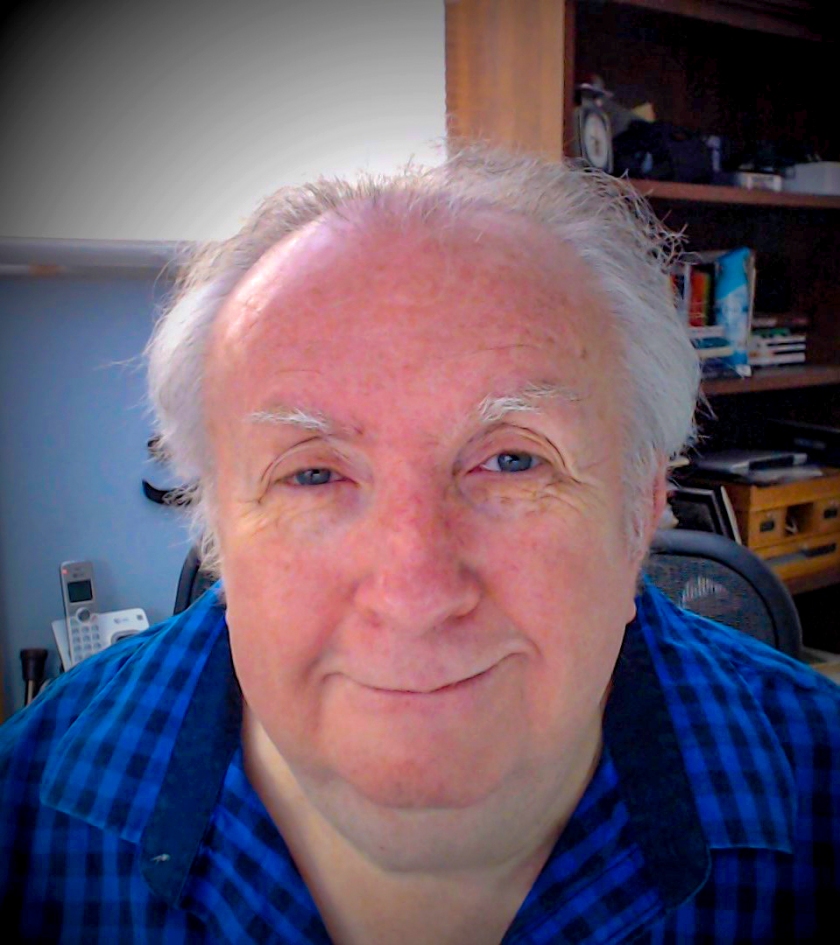 Four hundred and thirty short stories written, and none of them published in Analog—until now! Prolific horror and fantasy author Steve Rasnic Tem graces our lucky readers with a rare SF tale, “Captain Zack and the Data Raiders,” in our July/August issue [on sale now.]

Analog Editor: What is the story behind this piece?

SRT: The last few years I’ve been actively involved with organizations working on climate change. Two strong recommendations: the bipartisan Citizens Climate Lobby (citizensclimatelobby.org/) which lobbies Congress for serious climate legislation, and 2020 or Bust (2020orbust.org/mainpage/) which distributes a phone app helping individuals do their share in addressing climate change. A couple of years ago a CCL member pointed me to an article about a Berkeley “hackathon” organized to collect data from NASA’s earth sciences programs and the Department of Energy, as this data appeared to be disappearing from government websites. This person suggested that someone should write a story about a “rebel alliance” consisting of hackers out to rescue information erased by an “evil Empire.”

Although that specific idea was too broad for my taste, the possibility that each new administration—whatever the party—might erase or hide data for political reasons disturbs me greatly. Suppressed information, corrupted data, falsified news, the ethics of “doxing”—these are internet issues likely to affect us all. After a few months of mulling over these ideas, “Captain Zack and the Data Raiders” was the result.

SRT: A number of my usual readers will likely be surprised to find a story by me in Analog. In fact, after over 35 years of writing professionally (and with over 430 published short stories), this is my first Analog appearance. I’m primarily known as a fantasy and horror writer, and although I have published a small number of science fiction stories over the years in magazines like Asimov’s and Interzone, they haven’t been the kinds of stories you usually find in Analog. But I’ve been reading Analog since my college years, and keeping up with scientific developments in magazines like Science News and New Scientist has always been a passion of mine—it just hasn’t translated that often into content for my fiction. But perhaps that is shifting, especially with my concerns over our changing climate.

SRT: I’ve always been a voracious reader of fiction of all kinds: science fiction, mainstream, fantasy, weird, horror, old Gold Medal noir, the gamut. We didn’t have a public library in my region until I was entering high school, so my early reading was mostly folk and fairy tales. When we finally did get a library I was immediately drawn to the science fiction section—all the books with the rocket ship stickers on the spines. That’s where I read my first Clarke and Asimov, and although I didn’t think I would write like them, my experience with those books, along with my earlier experiences with folklore, let me know that whatever I wrote, it would be in the vein of the fantastic.

From that point on, almost everything I read led me to where I am today. But some key authors and books have been Ovid’s Metamorphoses, Kafka’s The Trial, Borges, Calvino, M.R. James, Richard Brautigan, Donald Barthelme, Harlan Ellison, Connie Willis, Thomas Disch, Ramsey Campbell, Dennis Etchison, Robert Aickman, just to name a few.

SRT: In the past, not much. Although I tend to think that an author’s writing is a kind of testament to the time and place he or she lives in, I’ve been leery of using specific current events for fear that the stories might not date well. But “Captain Zack” was inspired by a recent news story, and my concerns over climate change and how it affects our current world (and its future) are beginning to have a significant effect on the stories I choose to work on.

My last novel was a science fiction/horror blend, UBO, from Solaris. That was a world devastated by climate change and the resulting chaos it might cause, but it was primarily a study of human violence, featuring such viewpoint characters as Stalin, Himmler, Charles Whitman, and Jack the Ripper—whose minds we enter via a time travel mechanism. The impulse for writing that book was very much based on current events—I hate violence, and it’s probably the thing that disturbs me most about the world we’re living in. I did an enormous amount of research into those historical figures so that I could use real events to provide a window into their psychology and motivations.

SRT: It’s varied a great deal over the years. These days I would describe it as carefully controlled chaos. For most stories I begin with a general subject I want to write about, and something very small: maybe a cluster of words triggered by that subject, a snippet of dialogue, a passage of description, an overheard phrase or two. Sometimes I have a beginning passage, sometimes not. Often I don’t have an ending (a reversal of my early process—originally I had to know both the beginning and end before I could write). This initial part of the process is to find a character, a narrator through whose consciousness I can best tell the story. As I add thoughts and passages to the file, some lines begin to feel like internal thoughts, and when this happens I start imagining what kind of person would have such thoughts. Once I discover the character I often find that the character tells me where to go with the theme and what events to include. And most importantly—what is the emotional heart of the piece. I will often insert any raw research necessary to the story directly into the file until I determine where bits and pieces of it need to be dramatized in the narrative. At a certain point possible endings and transitions present themselves. Successive rewrites are used to strengthen the structure and sharpen the language, and a great deal of cutting occurs—often between 35 and 50 percent.

SRT: My most immediate project is my latest collection of short stories: The Night Doctor & Other Tales, coming in the Fall from Centipede Press. I’m also hard at work on a new “weird” novelette, “Pardon Our Dust: Overnight at the Canadian Arms Hotel.” Other projects in progress include a novel based on my zombie story “Bodies and Heads,” and a science fiction novel about immortality, AI, and interstellar travel.

SRT: My office space is littered with the bodies of dozens of books nibbled on, then bookmarked with whatever is handy until I can get back to them. Some examples: Wounds, the new collection from Nathan Ballingrud; A People’s Future of the United States edited by Victor LaValle and John Joseph Adams; Meander Spiral Explode: Design and Pattern in Narrative by Jane Alison; Heartbreaker: Stories by Maryse Meijer; There There by Tommy Orange; Exhalation: Stories by Ted Chiang; Emily, Alone by Stewart O’Nan; and Off Season, a graphic novel by James Sturm.

SRT: If you’re really serious about your craft, I’d suggest that you join a writer’s workshop. A local one is good, as long as the members are serious about their writing and are striving for publication. A really good short-term, national workshop can also be transformative. I highly recommend Jeanne Cavelos’s Odyssey, for example, which is basically a graduate-level program in science fiction and fantasy writing, but compressed into a few weeks.

Not everybody responds well to the workshop process, and many can’t afford the time or money expenditure for a national workshop. But there’s a lot you can do on your own. Something I recommend for all writers, new or old, in a workshop or not, is a reading program. You read 1,000 short stories (preferably from all genres, including genres you haven’t tried before, but reread some of your favorite stories as well). But don’t just read them—analyze them. What kind of strategy did the writer use to begin the story? What kind of strategy did the writer use to end the story? Make a list of those strategies with examples, build a skills inventory of ways to begin or end a piece. Think about how the writer structured the middle of the piece—how did he or she get from the beginning to the end? Did the writer introduce a sub plot? Did the writer use some sort of structural device (a list, a series of questions, an exploration of aspects) to construct the middle? Are there complications? Reversals? Answering these questions will give you some ideas about tackling some of the most difficult aspects of writing fiction.

My late wife Melanie and I cover many of these issues in our book on writing: Yours to Tell: Dialogues on the Art and Practice of Writing (Apex Books).

SRT: The predictions that really get to me are not the big central ideas of science fiction: time travel, space travel, AI, and the like. It’s the “background” predictions, the problems the writer assumes will be solved in order for all the wonders he or she has imagined to occur. These are the highly optimistic developments writers posit that will get us out of our current difficulties. I have to say I’m almost afraid to wish too hard for these, feeling that accepting their difficult reality is an important aspect of living in the Now.

A cure for cancer and other serious diseases is one. Having lost my wife and several friends to cancer I think about this one almost every day.

A related one is having good universal health care available for even the poor. We talk about it a lot, but the progress is slow.

Another is providing meaningful work for most people (which may be another way of saying “providing meaning for people”). A number of science fictional societies seem to imply this—but I see no clear path for getting there. Is it even being worked on in any serious way?

Still another is “fixing” aging. I’m not talking about immortality, really. I’m talking about fixing our attitudes toward it. Now we pretend it’s not going to happen to us. And our elderly suffer because too often it threatens us to look at them.

SRT: My home on the web is www.stevetem.com. There you will find ordering links, information on all my books, and a complete bibliography, among other things. My Twitter handle is @Rasnictem. My Facebook page is www.facebook.com/steve.tem. My Instagram is www.instagram.com/stevetem/. And you will find a number of image boards that I use to inspire my projects on my Pinterest page: www.pinterest.com/stevetem/.

Steve Rasnic Tem is a past winner of the Bram Stoker, World Fantasy, and British Fantasy Awards. His novels include the Stoker-winning Blood Kin, UBO, Deadfall Hotel, The Book of Days, Excavation, and with his late wife Melanie, Daughters and The Man on the Ceiling. He has published over 430 short stories and numerous collections. The best of these are in Figures Unseen: Selected Stories, from Valancourt Books.