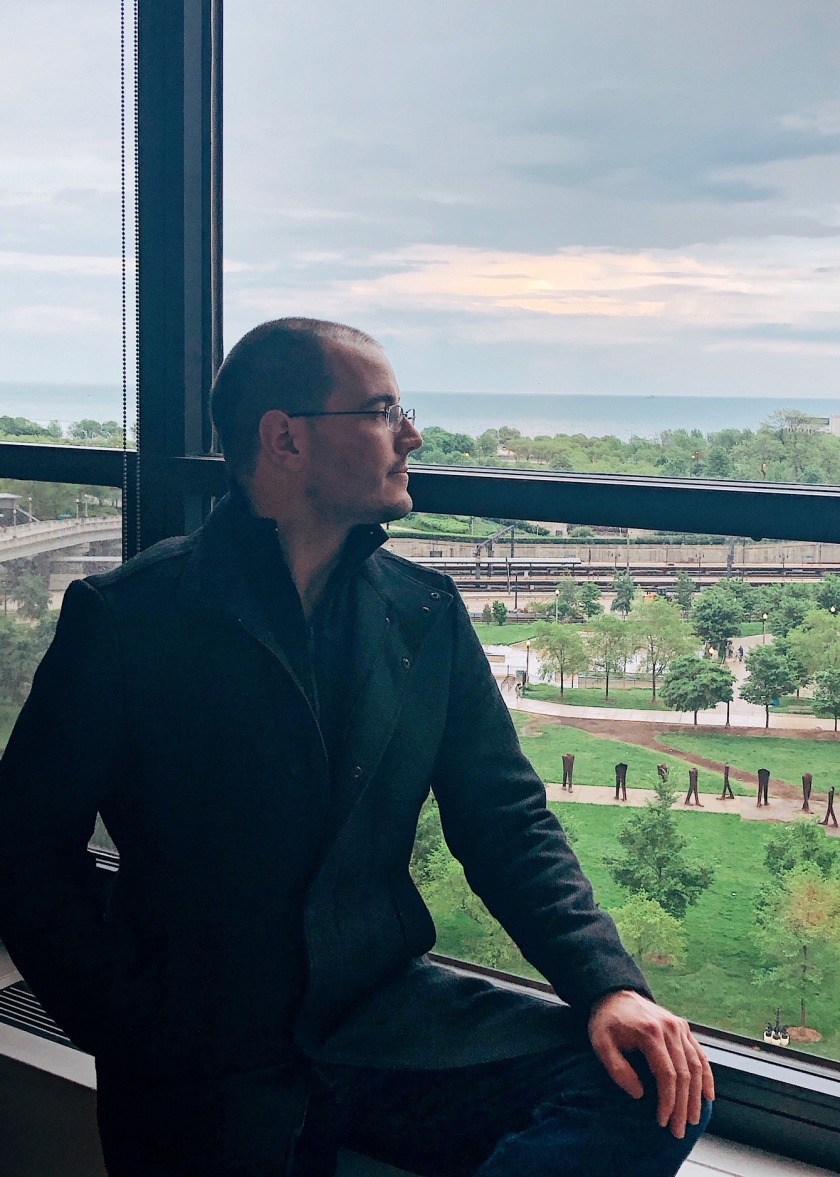 “This Hard World of Unwanted Beauty” [in our current issue, on sale now] explores Evan Marcroft’s interests in Pyrrhic victories, the human drive toward softness, and how humans affect the Other. Below, Evan discusses these themes in-depth, shares his history as a writer, and explains why his lack of scientific background is an asset.

Analog Editor: How did this story germinate?

EM: This story actually came out of a few lingering ideas leftover from a previous story, wherein a character artist for a fictional Sanrio-esque company had to design an adorable spaceship for a pair of cuteness-obsessed aliens. Here, both species were brought together by their fixation on softness and kawaii. The idea of both people and aliens being addicted to softness and by extension comfort remained an interesting concept afterwards, and I realized there was still plenty more “story” there. I think that we take it for granted how much we reshape our environment to be as plush as possible, filling our lives with pillows and slankets and things; it’s an unconscious instinct, in my view, and one that affects more than just our physical surroundings. In “This Hard World,” I decided to go down a darker road, see what would happen if we were thrust into an all-too “hard” world, explore the lengths we would go to in order to restore “softness,” and examine how that would play into our relationship with extraterrestrials.

EM: This piece isn’t connected in terms of setting to any other story of mine, but thematically, very much so. I’ve only recently noticed that many of my science fiction pieces are concerned with how humans can be changed by the other, the alien, but also how they can change the other as well. I don’t think that humanity can slam up against some alien culture without leaving a dent. No matter how advanced or otherworldly, I like to imagine that the people waiting for us out there are still people, still fragile and mutable. We’ve left our mark on everything we’ve touched on this planet, whether consciously or no. Why would it be different on others? “This Hard World,” I think, is my purest representation of that idea so far, where we leave human-shaped scars on even a seemingly indestructible world.

EM: I would say that the most prevalent theme throughout my work is the Pyrrhic Victory. I’ve never been one to believe that you can succeed absolutely at any goal; victories are won through the loss of something else, something unexpected, and what you win may not be what you set out to accomplish in the first place. “This Hard World” embodies this idea perfectly, in retrospect: while our human explorers manage to escape this deadly world, it costs them the comrades they never expected to find amongst the native population. I don’t think you can really earn something unless you never tried to get it, and you can’t appreciate what you have unless you don’t have it.

EM: Tough call. If I had to pick one, I’d say my biggest influence would be China Mieville, for his ability to so casually construct a universe incredibly different from our own, and to illustrate it with language that pushes the boundaries, in my mind at least, of what the English language can do. I write a lot in secondary worlds, and in that construction process, I always find myself emulating the techniques he employs in his worldbuilding. That guy can make monsters like no one’s business, and I’ve never seen anyone else use seventy words to describe a dusty hat. That takes real genius.

The way I see it, until we’re replaced by robots or die from something else, people are a constant throughout the many futures we write about. Not all of them, but robots can have emotional issues too.

EM: I’d started out trying to write books actually, which it turns out is a totally backward way to do things. It worked for Jim Butcher, but I’m not Jim Butcher. That went nowhere, so I decided instead to turn the small ideas in my head into narratives of their own, rather than string them into a longer beast of a story that nobody would read. My big, official, “break-in” moment would be my 2018 publication in Strange Horizons. I’ll always have a soft spot for that piece, “Chasing the Start,” but emotionally speaking, it didn’t really click that I was doing this until my second publication in Metaphorosis by B. Morris Allen, which showed me that not only could I write something someone would publish, I could do it twice.  It’s been two years since then, and plenty more publications, and that blast of confidence hasn’t faded yet. Metaphorosis may not be widely read, but they were the first magazine to really get my stuff, and I take every opportunity I get to plug them. Seriously, go check them out and tweet about it.

EM: Good question. Off the top of my head, I once went unreasonably deep into the history of the Ohlone people of California in order to describe an imaginary ghost hanging out around a tree in one line out of ten thousand words. That was an interesting if unproductive afternoon. For another story I had to do a deep dive into both Jewish mysticism and Gray Goo doomsday scenarios simultaneously, and that was a weird combination, in retrospect. There are connections between topics you’d never expect, and great fiction to be had in them.

EM: In terms of short fiction, I’ve found myself trying to pump out fantasy fiction set in a constructed world of mine called Nelga Nense, which is characterized by pervasive suffering and edginess. I originally wrote a 500-page novel in this setting, which got serialized online to some popularity a few years back, but never went anywhere professionally, because I was really bad at writing in 2014. Just terrible. Nevertheless, I found myself in love with this ugly little platter of misery I’d created, and came to enjoy exploring the weird corners of it through my short fiction. It seemed like a chance to raise it from the dead. By next year I’ll have three published stories in this universe, so who knows, maybe there’s still a hope for the ’Nense. Besides that, I’ve been brainstorming like mad for what I hope is my first actually publishable novel, and which I hope to get written in less than my usual two years. It’s shaping up to be tale of mad science, malevolent messiahs, and moving on. If it ever turns up at a Barnes & Noble, you’ll know the blood ritual worked.

EM: In preparation for the aforementioned novel, I’m reading through some of Lavie Tidhar and Jeff Vandermeer’s newer work, and hoping to stain my imagination with some of their infinite weirdness. Dead Astronauts, by the latter,is the cheapest high I’ve ever had. I’ve also been studying the output over at Clarkesworld obsessively. Once I get published there, my purpose on Earth will be fulfilled, and I’ll finally be able to move on to the afterlife.

EM: I have absolutely no scientific background. Totally zero. I was an English major in college and not even for creative writing. While this does put me at a disadvantage in that I don’t have the know-how immediately on hand to make my work really grounded in science, it does free me up to focus on the characters, and how the speculative bent to their story affects them emotionally and psychologically. The way I see it, until we’re replaced by robots or die from something else, people are a constant throughout the many futures we write about. Not all of them, but robots can have emotional issues too.

EM: The second-best advice I can give is to give up trying to make feedback make sense. I have had so many readers give completely opposite sets of notes on a story, you don’t even know. There is no way to make everyone happy; somebody is guaranteed to hate what someone else loves. All you can do is write the story that you want to write as accurate to how it looks in your head, and hope that somebody at your favorite magazine happens to be all about that.

The best advice is to please don’t use exclamation points in an internal monologue. It reads like nails on a chalkboard sounds.

Evan Marcroft is a half-blind yeti person from Sacramento California, currently operating out of Chicago with his wife. Evan uses his expensive degree in literary criticism to do menial data entry, and dreams of writing for video games, though he’ll settle for literature instead. His works of science fiction, fantasy, and spine-curdling horror can be found in a variety of venues, such as Pseudopod, Strange Horizons, and Asimov’s SF. Find a complete list of his published works at evan-marcroft.squarespace.com.