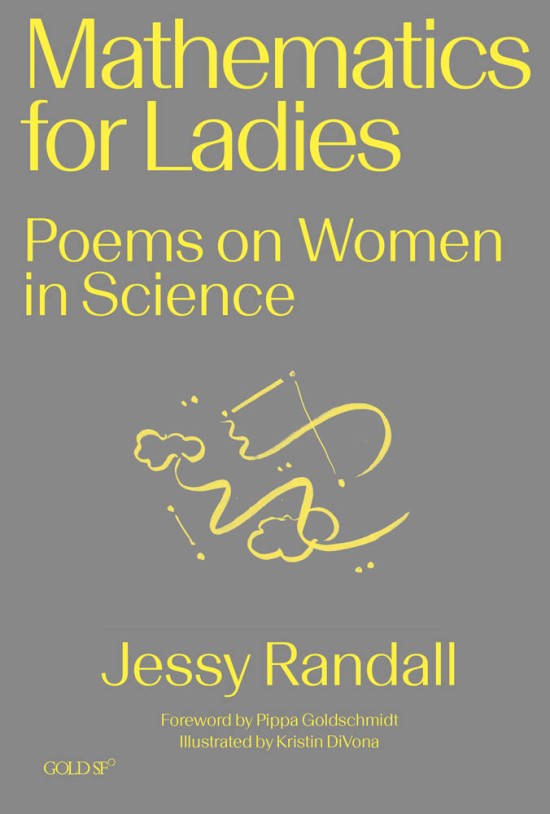 Here is a special entry of the Astounding Analog Companion, in which poet Jessy Randall interviews Una McCormack and Paul March-Russell, two founders of the new science fiction publication Gold SF, from Goldsmiths Press. They are publishing Randall’s new book, Mathematics for Ladies, which features poems about women in STEM fields. Read it in September 2022!

Jessy Randall: Tell me about your roles in the founding of Gold SF. Was it a sudden epiphany, or a long time coming?
Una McCormack: It was a long time coming followed by a sudden epiphany! I’m a reader and collector of the 1980s Women’s Press science fiction, and I’d long thought that a new imprint devoted to something similar, but responding to our contemporary situation, was overdue. Then I gave a talk at Goldsmiths on feminist enclaves—and that’s where I met Professor Sarah Kember, the director of Goldsmiths Press. I said I thought they should consider a feminist SF imprint, and she said, “OK, let’s do it.” When we were considering people to bring onto the editorial board, Paul was the first person I thought of—his expertise, experience, and of course the huge respect in which he’s held by the SF community. We’d met when we were judges on the Clarke Award one year, so I knew that we got on and were sympatico.
Paul March-Russell: Yes, that’s right. Una and I had been judges for the Clarke Award in 2017, the year that Colson Whitehead won with The Underground Railroad, so we already had a very good sense of each other’s views about SF. Besides editing the journal Foundation and Gylphi’s SF Storyworlds series, I was then convenor of the science fiction program (sadly no more!) at the University of Kent. I taught classic women’s SF—Russ, Le Guin, Butler—alongside newer writers like Lauren Beukes and Nnedi Okorafor. In 2019, Una emailed me, inviting me to a meeting with Sarah to discuss the possibility of a feminist SF imprint. I thought it was a great idea and was happy to tag along as “the token man”!

JR: Are you involved in the day-to-day decisions of the imprint now?
UM: The design and most of the editorial side is handled by Goldsmiths, as is administering submissions, etc. I read everything that comes in, as do various members of the board, and I also do editorial work with authors.
PMR: Yes, like Una, I’m involved with reading the manuscripts that come in, making a critical evaluation, suggesting edits, and commissioning the authors we finally accept. Although the rest of the production process is down to Goldsmiths, I tend to be a source of items for our Twitter feed. We have a very active editorial board, like the amazing Sherée Renee Thomas, so we like to amplify the brilliant things they’re doing.

JR: I’m so pleased and proud that my book, Mathematics for Ladies: Poems on Women in Science  [https://mitpress.mit.edu/books/mathematics-ladies], forthcoming September 2022) will be the first in the series. I’ve seen some teasers on Twitter about other books in the series. What can you tell me about Gold SF’s first year or two of books?
UM: We loved your manuscript. We all looked at each other and said, “We have to publish this . . .” We were delighted you came on board!
Along with your book, we’re publishing a novella, Empathy, by Australian writer, Hoa Pham [https://www.hoapham.net/]. We have another novella by her, The Other Shore, coming next year. She’s published extensively in Australia, and is the founder of Peril Magazine [https://peril.com.au/], an Asian-Australian online arts and culture magazine. Again, we knew straight away that these were stories we wanted to publish. I think people are going to be excited about her writing and her ideas.
PMR: Our other forthcoming books are The Disinformation War by S.J. (Sarah) Groenewegen [https://www.sjgroenewegen.co.uk/] and The Ghostwriters by Gabrielle Malcolm, writing as M.J. Maloney. Sarah is also from Australia but she now lives in Scotland. Like Una, she’s worked extensively within the Whoniverse and is a well-known panelist at conventions. But this book draws upon Sarah’s experience in law and policing, for which she won a British Empire Medal. It’s a story that speaks urgently to our current anxieties around border controls and securitization. Gaby, by contrast, is a British scholar who’s published on nineteenth-century authors like Jane Austen and Mary Elizabeth Braddon, and the fan cultures that have built up around them. She’s also a children’s writer, festival director and works with Bath’s House of Frankenstein, but this is her first SF novel. It’s written in a classic satirical style, with shades of novels like Zoe Fairbairns’s Benefits, but with a contemporary “hopepunk” feel.
UM: We’re also hoping to put some feminist SF authors from the 70s and 80s back into print. This was one of the original ideas that Sarah and I had, back when we were first discussing the imprint. It’s so easy for these authors to disappear—someone has to tend to the tradition and make sure they don’t get lost.

JR: Analog readers will surely want to know about your personal connections with science fiction as readers, authors, and fans. What first drew you to SF?
UM: Ursula Le Guin. I went from Earthsea to the short fiction, and from the short fiction to the novels. My other first loves were chiefly film and TV SF: Blake’s 7, Doctor Who, the Star Trek movies in the 80s, and then Star Trek: The Next Generation. I read a huge amount of TV tie-in fiction (which eventually became my job). In my 20s, I discovered Lois McMaster Bujold. I think I have a slightly different reading trajectory from many of my peers, in that I didn’t read the generally accepted “canon” as a teen—I was busy watching TV and writing fanfiction!
PMR: My earliest SF memories are all TV too—Doctor Who, Star Trek, The Tomorrow People, Space: 1999. I watched 2001: A Space Odyssey when I was 8, and had to get a second-hand copy of the novel to make sense of it. My mum was a single parent, and a medical secretary, and her colleagues used to give her old SF books—Asimov, Clarke, Harry Harrison . . . I read my first Ballard, The Voices of Time, at the age of 10. There was a great SF collection at my local library— lots of Hugo and Nebula Award collections—I read Michael Moorcock’s Behold the Man when I was 13, and was warped for life. It was Moorcock’s essay, “Starship Stormtroopers,” which made me aware of writers like Hilary Bailey, Ursula Le Guin, and Joanna Russ. My brother, now a theoretical physicist at Oxford University, nicked a copy of John Wyndham’s The Kraken Wakes from his school library and he also encouraged me to read Le Guin. Reading A Wizard of Earthsea, also at the age of 13, was one of the most transformative experiences of my early literary life.

JR: What SF are you reading and viewing in 2022?
UM: I’ve just done a deep dive into early 70s feminist SF to write an article for Foundation. I’m a member of a post-apocalyptic reading group, and we’re about to read NK Jemison’s collection How Long ’til Black Future Month? I’m partway through My Monticello by Jocelyn Nicole Johnson, and—in non-fiction—The Disordered Cosmos by Chanda Prescod-Weinstein. I’ve got Emily St John Mandel’s Sea of Tranquillity lined up next!
In viewing, I was lucky enough to be invited recently to a preview of footage from The Lord of the Rings: The Rings of Power, so I’m looking forward to seeing more. It’s also a golden age for us Star Trek fans—I’m just about keeping up with what’s coming out! The new Doctor has just been announced too.
PMR: As editor of Foundation, I try to keep up with what’s coming out—the new Mandel is obviously an important book, as are the latest titles from Emmi Itäranta and Adam Roberts. But my own reading is skewed by teaching and research interests. I’m working on a short book about Ballard’s Crash, which remains a genuinely disturbing text, and I’m also writing an introduction to Edward Shanks’s 1920 post-apocalyptic novel, The People of the Ruins, to be published by MIT Press. I have a longer research project about landscape and contemporary English women’s fiction which I’m working towards; it’s not specifically SF, but I’ve been reading novels like Sarah Hall’s The Wolf Border, an alternate present.
To be honest, I rarely watch TV or go to the cinema. But my children keep me up to speed with Squid Game, The Mandalorian and Moon Knight. My ex-student, Ryan Coogan, recently wrote a piece about the MCU for The Independent and, on the strength of that, I might be tempted to watch the new Dr Strange movie.

JR: Is Gold SF currently accepting proposals? How can people submit?
UM: Right now we’re busy getting the next couple of books into production, but we will be accepting proposals again later in the year. People can find the submissions guidelines online here.
I’d encourage people to keep an eye on Twitter to find out when the submission window is open again: @goldsf_books
PMR: We’ll also be advertising the next call via the Foundation Facebook group, so look out for that too.

Jessy Randall’s poems, stories, and other things have appeared in Asimov’s, Lady Churchill’s Rosebud Wristlet, Nature, Poetry, and Scientific American. Her most recent book is How to Tell If You Are Human: Diagram Poems (Pleiades, 2018). She is the Curator of Special Collections at Colorado College, where she occasionally teaches a class in The History and Future of the Book.

Dr. Paul March-Russell is a Senior Lecturer in English at Cardiff Metropolitan University, where he teaches graduate and undergraduate courses in Romantic, Victorian, and 20th/21st century literature.