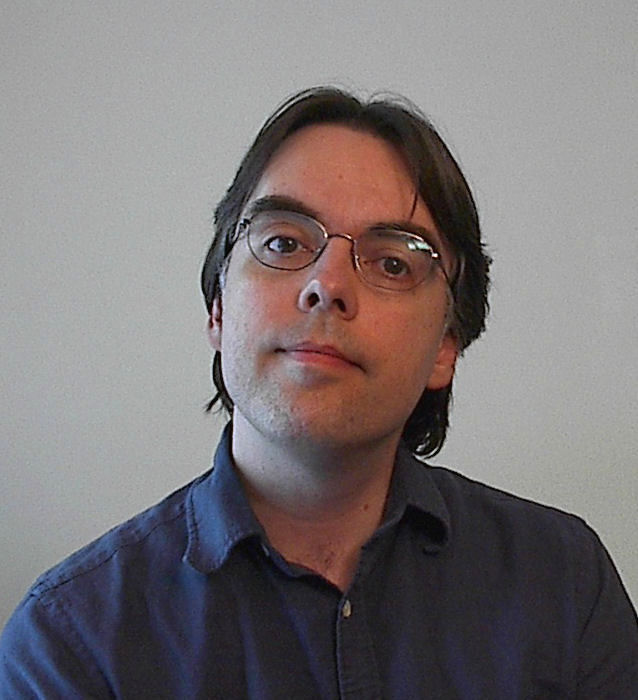 The latest in Christopher L. Bennett’s Hub series is featured in our current issue [on sale now]. Below, he explains the origins of the series as well as the origins of his writing career and interest in science fiction.

Analog Editors: Is this piece part of a greater universe of stories?

Chrisopher L. Bennett: “. . . And He Built a Crooked Hub” is the fifth novelette in the Hub series of comedy SF stories, which have been appearing intermittently in Analog since 2010, and whose first three installments are collected in revised and expanded form in Hub Space: Tales from the Greater Galaxy, available from Mystique Press as an e-book or trade paperback. It’s also the middle of a loose trilogy of stories which began with “Hubpoint of No Return” in the May/June 2018 issue and will conclude with “Hub-stitute Creatures” in an upcoming issue.

CLB: The Hub series began as a hypothetical idea for a TV sitcom, since I was dissatisfied with most of the science fiction sitcoms that had existed up to that time (except for Red Dwarf and Futurama) and wanted to imagine something better. So I conceived it with the practical and budgetary limits of a sitcom in mind, for instance choosing to set it at a transportation hub (a la Taxi at a cab company or Wings at an airport) as a way to bring an endless variety of stories and characters through the same standing sets. Hence the core premise of the Hub, a spacewarp that’s the only known means of FTL travel, requiring all interstellar civilization to pass through it. But a travel hub needs hotels, so one of my earliest ideas for the series was that the Hubcomplex would use tesseracts to fit multiple hotel rooms into the volume of a single room. That had obvious comic possibilities for room mixups and a door-slamming bedroom farce. So I’ve always intended to tell this particular story sooner or later. But I had to wait for the right opportunity, the point where it would best fit into the evolving character arcs.

CLB: The title is an homage to Robert A. Heinlein’s “—And He Built a Crooked House—” from the February 1941 Astounding Science Fiction, the precursor to Analog. That story, which I first read in an elective college course about physics in science fiction, was a comedy about a family that got trapped in an experimental tesseract house, and was the original inspiration for the tesseract-suite concept in the Hub series. Since all the Hub story titles are puns on the word “Hub,” the title was pretty much inevitable.

CLB: My introduction to science fiction was Star Trek, so I’ve always felt that SF should reflect and comment on issues in the real world. I often do write things with allegorical intent, though as a student of history I try to put them in a larger historical context, to address patterns that recur throughout history, as a way of putting current concerns in perspective.

In recent times, though, current events in the United States and elsewhere in the world have been growing ever more disturbing, so I daresay the extent to which they inform my writing has increased. The values that I’ve always tried to advocate in my work are under worse attack than ever, and it’s more important than ever to speak up for them.

CLB: It was Analog’s longtime editor Stanley Schmidt who cultivated me as a writer through the advice he gave me in his rejection letters during the first few years I was trying to break into the field. I think he saw potential in me that he wanted to encourage, and the fact that we’re both from Cincinnati may have been a factor too. His rejections helped me see the weaknesses in my early work and realize how much I had to raise my game. Eventually, Stan bought my first story for Analog, “Aggravated Vehicular Genocide” in 1998, and two years later he bought my second, “Among the Wild Cybers of Cybele.” Those two sales gave me enough credentials to catch the eye of Pocket Books’ Star Trek tie-in editors Keith R.A. DeCandido and Marco Palmieri a few years later, and they gave me the breaks that led to my ongoing career as a Star Trek novelist.

CLB: I didn’t so much start writing as discover that I was already doing it. As a kid, I liked to daydream and invent stories in my head. I had a set of “Star City” building blocks, sort of like futuristic LEGOs, and I liked to imagine stories about the inhabitants of the future cities I built, and to develop the universe they inhabited. One day, when I was 13, I imagined a complete story from beginning to end, not even playing with the city but just visualizing it in my mind, and I realized that what I’d just done was writing. At that moment, I knew what I was going to do with my life. (I never actually wrote that story down on paper, though.)

CLB: The prediction of Star Trek and some other science fiction that humanity will eventually outgrow war, bigotry, sexism, greed, and cruelty. I still believe the overall arc of history is inevitably heading in that direction, even though we’re currently going through some major setbacks.

CLB: For Tower of Babel, the second book in my Star Trek: Enterprise—Rise of the Federation series, I got sidetracked for days researching card and coin magic and non-Western board games, because I wanted to invent an original magic trick for a nonhuman character to perform for his crewmates. An ordinary card trick seemed too unimaginative. I spent an inordinate amount of time on this one scene, even though I was under very tight deadline pressure. I eventually created a trick that satisfied me, and in the first draft I gave away how it worked, but then I revised the scene to preserve some of the mystery. I’m afraid readers may think I cheated, but I took care to design a trick that would actually work as described.

CLB: I have a bachelor’s degree in physics from the University of Cincinnati, but I struggled to earn it because I could never quite master the higher math. I’ve always tried to keep my writing scientifically accurate and informative; I’ve always found hard science fiction to be a great way to learn about science (I got a better understanding of quantum physics from Greg Egan’s fiction than I did from my college course in the subject), so I try to make my work educational too. However, I’ve found that my second college degree, a BA in history, has probably been more influential on my writing, because I focused on world history and frontier interactions, the contrast and interplay of different cultures and worldviews, and that’s helped me a great deal in developing alien societies, their histories and politics, and their interactions with humans and others.

CLB: Writing is the only career I’ve ever had or ever wanted. I definitely would’ve been wiser to pursue some kind of alternate career to pay the bills, but I’ve never been a very practical sort and I can’t imagine myself in a corporate environment.

Christopher L. Bennett is a lifelong resident of Cincinnati, Ohio, with a B.S. in Physics and a B.A. in History from the University of Cincinnati. A fan of science and science fiction since age five, he has spent the past two decades selling original short fiction to magazines such as Analog Science Fiction and Fact (home of his “Hub” series of comedy adventures), DayBreak Magazine, and BuzzyMag. Since 2003, he has been one of Pocket Books’ most prolific and popular authors of Star Trek tie-in fiction, including the epic Next Generation prequel The Buried Age, the Star Trek: Department of Temporal Investigations series, and the ongoing Star Trek: Enterprise—Rise of the Federation series. He has also written two Marvel Comics novels, X-Men: Watchers on the Walls and Spider-Man: Drowned in Thunder. His original novel Only Superhuman, perhaps the first hard science fiction superhero novel, was voted Library Journal‘s SF/Fantasy Debut of the Month for October 2012. He has two collections reprinting his original short fiction, Among the Wild Cybers: Tales Beyond the Superhuman from eSpec Books (containing an original Only Superhuman prequel novelette) and Hub Space: Tales from the Greater Galaxy from Mystique Press.