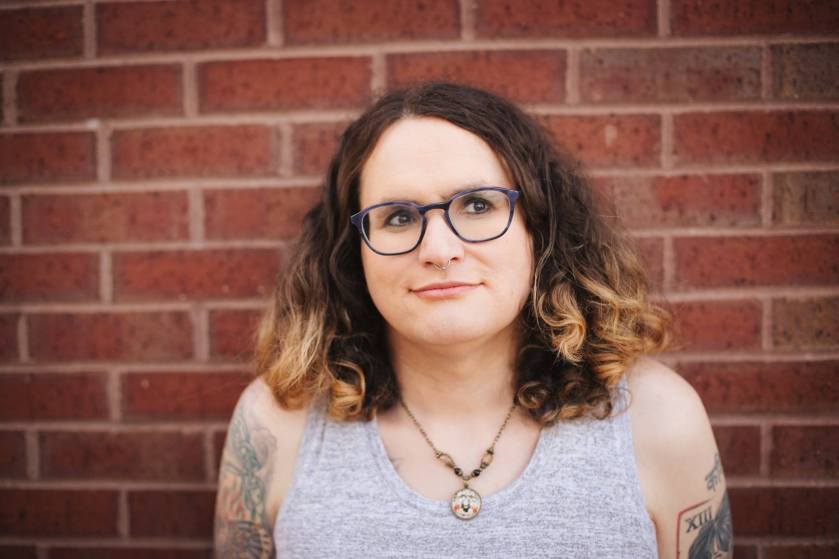 For Izzy Wasserstein, science fiction has more to say about our present than about possible futures. Her own queer-centric, antifascist fiction speaks volumes about where we are. “The Grass Bows Down, the Pilgrims Walk Lightly” [in our current issue, on sale now] is Izzy’s first story with Analog, and we hope that our future holds more from her.

Analog Editor What is the story behind this piece?

Izzy Wasserstein: I wrote the first draft of this piece in 2017 while I was a student at Clarion West. I’d been trying to tell a story about the connections between memory and action, and I’d had in mind for a while that there were ideas I might want to use—Odin’s legendary ravens, the way prion-folding might function as something like a memory—but I hadn’t figured out how to pull it all together. At Clarion West I was finally able to find a structure for the story. My wonderful classmates, and John Chu, our instructor, helped me figure out how to make it all work.

IW: It came to me very slowly. I had months’ worth of failed drafts before I figured out a structure and emotional arc.

IW: I do. I particularly relate to Erika, in that I’ve often found the lure of the known and comfortable to be powerful. I also identify with the way she finds herself changing—pursuing a path that would have once felt unthinkable. I like to think that if we keep ourselves open to changes and new experiences, we might uncover our own secrets, even if we might never set foot on alien worlds.

IW: This is my first sale to Analog. I could not be more delighted that it’s appearing in the 90th anniversary issue!

IW: Like many other people, I’ve been inspired by the work of Ursula K. Le Guin and Octavia Butler. Kij Johnson and Sarah Pinkser helped me realize what speculative fiction could be and drove me to try writing it myself. Pat Cadigan is a goddess, and not nearly as scary as the rumors have it. I’ll read anything N.K. Jemisin writes, and I can’t get enough of Charlie Jane Anders and Annalee Newitz. Natalia Theodoridou is doing essential work, and so is Vina Jie-Min Prasad. I could go on. Speculative fiction is wildly vibrant right now, and my biggest challenge is keeping up on all the authors whose work I deeply admire.

IW: They greatly influence my writing. I take the view that SF has more to say about out present cultural moment than it does about possible futures. I suspect we’ll never go on pilgrimages on alien grassland, but I can practically guarantee that we’ll find ourselves making hard choices as climate change puts increasing pressure on our environment.

Next year, the Supreme Court will decide whether it’s legal to fire trans people like me just for existing. That doesn’t come up directly in this story, but it is one of many things that shapes my decision to center queer romance and queer loss in my work.

I like to think that if we keep ourselves open to changes and new experiences, we might uncover our own secrets, even if we might never set foot on alien worlds.

IW: I’m obsessed with memory, in part because my own long-term memory is extremely poor, but also because our memory of the past is the way we can make reasonable choices about the future. Over and over, I come back to the ways that memory shapes us.

All my stories feature queer characters in some way, because I want to represent my own community, and because we all deserve to be seen in our full range of complex personhood.

Lastly, I write a lot of anti-fascist fiction, because fascists are returning to public prominence and to power, and it is essential that we defeat them.

IW: I’ve constantly got a series of stories at various levels of (in)completion. Right now my works-in-process include a story set in my Traverse fantasy world, a story about the magical power of music, and a flash fiction piece about a near future where climate change and rapid growth of invasive vine species are driving mass migration.

IW: I’m tempted to say that Le Guin’s Hainish universe is the one I’d most like to live in, but Ian M. Banks’ Culture would have to be my first choice. A post-scarcity future that values individuals, with a society shaped by the idea of the fundamental worth of each being, sounds like heaven, especially in our political moment. And I’m enough of an idealist to think I’d probably be one of those trying to fix even that utopia.

IW: There’s this amazing moment in Susan Jane Bigelow’s “The Heart’s Cartography” after a time traveler has revealed a little bit about the future to the protagonist, Jade:

“We survive. … she was filled with a wild, wonderful hope.

“The future could be better than the past. Things could keep changing.”

Jade is thinking specifically about her identity as a trans girl, but more broadly, the SF prediction that I hope comes true is that, as a species, and in the full range of our diverse identities, we survive. We keep changing. We cultivate a better world. Beyond that, it’s just working out the details.

IW: Since I’m one of those up-and-coming writers (or so I hope), I don’t know how qualified I am to weigh in on this. But a couple of things stand out to me: get used to rejection and cultivate kindness. Building friendships with other writers will help you when you’re down, and celebrating each other’s success is one of the greatest joys of being a writer.

Izzy Wasserstein teaches writing and literature at a university in the American Midwest and writes poetry and fiction. Her work has appeared in Clarkesworld, Fireside Magazine, Apex, and elsewhere. Her most recent poetry collection is When Creation Falls. She shares a home with her spouse, Nora E. Derrington, and their animal companions. She’s an enthusiastic member of the 2017 class of Clarion West and likes to slowly run long distances.